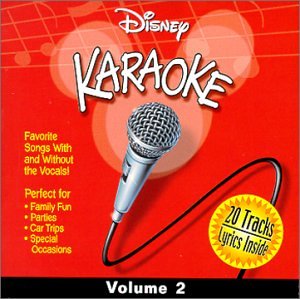 The second volume of Disney Karaoke stands tall in comparison with the chirpy premiere outing of this series. Again, 10 songs from films including Cinderella ("A Dream Is a Wish Your Heart Makes"), Dumbo ("Baby Mine"), and The Jungle Book ("The Bare Necessities") are presented first with vocals and then instrumentally, allowing starry-eyed would-be singers to belt their way through these feel-good numbers with or without an audience and a microphone. But even those who'd rather take tea with Cinderella's stepsisters than clown around in classic karaoke fashion won't feel their money's been wasted on this CD. Despite the absence of celebrity vocals, the performances roundly razzle-dazzle; on standouts such as "Friend Like Me" from Aladdin and "Under the Sea" from The Little Mermaid it's clear that Disney's vast talent pool isn't getting any shallower. And the inclusion of complete lyrics in the liner notes, crucial to any karaoke album, serves the dual purpose of erasing sing-along riddles and stirring fuzzy memories of Disney-style movie magic. --Tammy La Gorce